Washington Irving is considered as the Father of the Short Story, which began as an American literary form. His delightful story Rip Van Winkle is thought to have been the first American short story.

In 1916, W. Patterson Atkinson said the following about the short story:

“A short story is a piece of prose fiction that typically can be read in one sitting and focuses on a self-contained incident or series of linked incidents, with the intent of evoking a single effect or mood.”

“The short-story also is impressionistic because it leaves to the reader the reconstruction from hints of much of the setting and details.

“Washington Irving was an American short-story writer, essayist, biographer, historian, and diplomat of the early 19th century. He is best known for his short stories “Rip Van Winkle” and “The Legend of Sleepy Hollow”, both of which appear in his collection The Sketch Book of Geoffrey Crayon, Gent. Wikipedia
Born: April 3, 1783, Manhattan, New York, NY
Died: November 28, 1859, Washington Irving’s Sunnyside, Tarrytown, NY

Tarrytown is the fictional home of Irving’s book The Legend of Sleepy Hollow. The fictional village where Rip Van Winkle lived was about 2 hours away, in the Catskill Mountains. 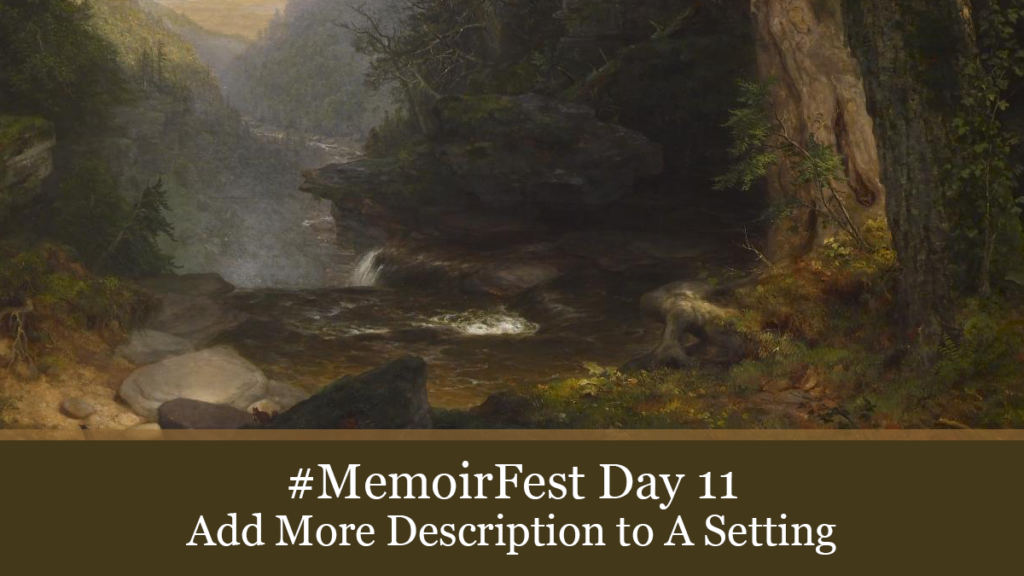 #MemoirFest Day 11 – After you study the following of Irving’s uses of descriptive writing, I want you to edit and/or rewrite what you have written about the terrain of the area where you grew up.

“Whoever has made a voyage up the Hudson must remember the Kaatskill mountains. They are a dismembered branch of the great Appalachian family, and are seen away to the west of the river, swelling up to a noble height, and lording it over the surrounding country.

“Every change of season, every change of weather, indeed, every hour of the day, produces some change in the magical hues and shapes of these mountains, and they are regarded by all the good wives, far and near, as perfect barometers. When the weather is fair and settled, they are clothed in blue and purple, and print their bold outlines on the clear evening sky; but sometimes, when the rest of the landscape is cloudless, they will gather a hood of grey vapours about their summits, which, in the last rays of the setting sun, will glow and light up like a crown of glory.”

“…Rip had unconsciously scrambled to one of the highest parts of the Kaatskill Mountains. He was after his favourite sport of squirrel shooting, and the still solitudes had echoed and re-echoed with the reports of his gun. Panting and fatigued, he threw himself, late in the afternoon, on a green knoll, covered with mountain herbage, that crowned the brow of a precipice. From an opening between the trees he could overlook all the lower country for many a mile of rich woodland. He saw at a distance the lordly Hudson, far, far below him, moving on its silent but majestic course, with the reflection of a purple cloud, or the sail of a lagging bark, here and there sleeping on its glassy bosom, and at last losing itself in the blue highlands.

On the other side he looked down into a deep mountain glen, wild, lonely, and shagged, the bottom filled with fragments from the impending cliffs, and scarcely lighted by the reflected rays of the setting sun. For some time Rip lay musing on this scene; evening was gradually advancing; the mountains began to throw their long blue shadows over the valleys…

“…a deep ravine, or rather cleft, between lofty rocks, toward which their ragged path conducted. He paused for an instant, but supposing it to be the muttering of one of those transient thunder-showers which often take place in mountain heights, he proceeded. Passing through the ravine, they came to a hollow, like a small amphitheatre, surrounded by perpendicular precipices, over the brinks of which impending trees shot their branches, so that you only caught glimpses of the azure sky and the bright evening cloud.”

“On waking, he found himself on the green knoll whence he had first seen the old man of the glen. He rubbed his eyes—it was a bright sunny morning. The birds were hopping and twittering among the bushes, and the eagle was wheeling aloft, and breasting the pure mountain breeze.”

“… a mountain stream was now foaming down it, leaping from rock to rock, and filling the glen with babbling murmurs. He, however, made shift to scramble up its sides, working his toilsome way through thickets of birch, sassafras, and witch-hazel, and sometimes tripped up or entangled by the wild grape-vines that twisted their coils or tendrils from tree to tree, and spread a kind of network in his path.

“At length he reached to where the ravine had opened through the cliffs to the amphitheatre; but no traces of such opening remained. The rocks presented a high, impenetrable wall, over which the torrent came tumbling in a sheet of feathery foam, and fell into a broad deep basin, black from the shadows of the surrounding forest.”

The Valley Where The Houses Were Built

“At the foot of these fairy mountains, the voyager may have descried the light smoke curling up from a village, whose shingle-roofs gleam among the trees, just where the blue tints of the upland melt away into the fresh green of the nearer landscape. It is a little village, of great antiquity, having been founded by some of the Dutch colonists in the early times of the province, just about the beginning of the government of the good Peter Stuyvesant (may he rest in peace!), and there were some 4of the houses of the original settlers standing within a few years, built of small yellow bricks brought from Holland, having latticed windows and gable fronts, surmounted with weathercocks.”

” it was the most pestilent little piece of ground in the whole country; everything about it went wrong, in spite of him. His fences were continually falling to pieces; his cow would either go astray, or get among the cabbages; weeds were sure to grow quicker in his fields than anywhere else; the rain always made a point of setting in just as he had some outdoor work to do; so that though his patrimonial estate had dwindled away under his management, acre by acre, until there was little more left than a mere patch of Indian corn and potatoes, yet it was the worst-conditioned farm in the neighbourhood.” 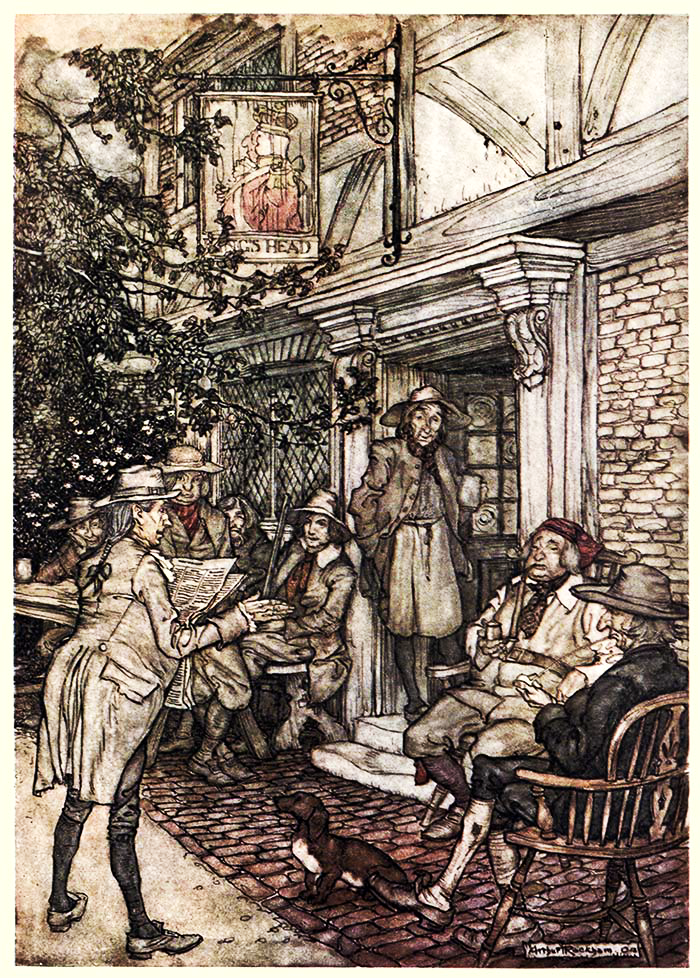 “…a kind of perpetual club of the sages, philosophers and other idle personages of the village, which held its sessions on a bench before a small inn, designated by a rubicund portrait of His Majesty George the Third. Here they used to sit in the shade through a long, lazy summer’s day, talking listlessly over village gossip, or telling endless, sleepy stories about nothing. ”

“The very village was altered; it was larger and more populous. There were rows of houses which he had never seen before, and those which had been his familiar haunts had disappeared. Strange names were over the doors—strange faces at the windows—everything was strange. His mind now misgave him; he began to doubt whether both he and the world around him were not bewitched. Surely this was his native village, which he had left but the day before. There stood the Kaatskill Mountains—there ran the silver Hudson at a distance—there was every hill and dale precisely as it had always been. Rip was sorely perplexed. “That flagon last night,” thought he, “has addled my poor head sadly!”